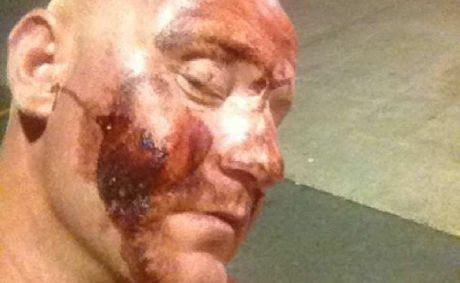 A MOUNTAIN Creek man facing one charge of obstructing police says he was savagely bashed by officers during his arrest.

Lawyer Adrian Hawkes alleged that his client, Timothy William Barker, 28, was assaulted while being arrested on Christmas Day.

"My client has been seriously attacked by the two officers," Mr Hawkes told Maroochydore Magistrates Court.

Magistrate Bernadette Callaghan said there were mechanisms in place to respond to such allegations.

"If your client has a complaint against the police, he should take it to the CMC," she said.

"He already has," Mr Hawkes responded.

Ms Callaghan adjourned the matter to February 11 to enable case-conferencing between both parties, a direction Mr Hawkes opposed.

The events leading to Mr Barker's arrest were not clarified in court yesterday.

Mr Hawkes said he took photos of the injuries when Mr Barker was released from Maroochydore watchhouse.

He said his client unsuccessfully asked police on Boxing Day to drop the obstruction charge.

I don't know much about this but a man claims that in 1988 he saw  Qld. Assistant Police Commissioner Paul Wilson murder a uniformed police officer then leave the scene of the murder (in Airlie Beach North Queensland) looking like  a suicide.

Shortly afterwards Wilson and underworld associates allegedly stole 2 tons of confiscated cocaine from Airlie Beach police station.  When asked about the missing drugs, the cops simply said,  "We can't find it. It's been lost..."

The witness was subsequently savagely beaten in an apparent attempt to shut him up.  He has tried various avenues to draw attention to his matters but has hit a brick wall throughout, not very surprisingly.

The claims are in an eBook available on Amazon here ... which see  -- JR

Commissioner Stewart is currently under investigation by the Anti-discrimination Commission for acts of reprisal against police officer, Senior Constable Lyn Jones for participating in a public interest disclosure.

The public interest disclosure concerned a forensic officer from the Fingerprint Bureau Brisbane stealing from a crime scene.  The incident was reported to senior management at the Fingerprint Bureau, Inspector Brendan Keleher and Inspector Tony Carstensen, who then bullied staff not to report the incident as they had both applied for promotion and "didn't want anything interferring in their promotional prospects".

After disclosing the incident to Ethical Standard Command, S/C Jones was advised by Senior Sergeant Blair Webber at the Fingerprint Bureau that the senior officers were "drumming up" complaints against her to "get rid of her".  Five (5) months later S/C Jones was managerially transferred from the fingerprint bureau under allegations of complaints made against her.  One (1) month later she was suspended without pay in relation to false complaints submitted by Sergeant David Reece, Sergeant Waldo Kowalsky and S/Sgt Blair Webber of the fingerprint bureau.

The complaints were investigated by Inspector Ray Rohweder who is a known associate and mate of S/Sgt Webber.  Rohweder was also under investigation, at that time, for threating and bullying staff.  After being found guilty of these offences, Rohweder was managerially transferred from Ethical Standard Command, but made sure he took S/C Jones' disciplinary file with him.   Rohweder then continued to "drum up" complaints against her.

Three (3) years later S/C Jones is still suspended without pay on false complaints.  To date, her disciplinary file is over 1000 pages as Inspector Rohweder collects statements from "rent a crowd".

CMC advised S/C Jones in March 2012 that "from the documents ESC had provided it was quite obvious that the QPS was trying to get rid of her as she had been labelled a 'trouble maker' for being a whistleblower".

The public should hear not only about the bad cops, but what happens to the good cops who dob them in.  Officer who particpate in a public interest disclosures and tell the truth get bastardised by management, receive death threats and labelled "dogs".   If we keep our mouths shut we get dismissed from the service for not dobbing them in.  In other words, we're dammed if we do and dammed if we don't.

But S/C Jones is not one for being bullied by the "boys club" and has submitted a complaint to the Anti-Discrimination Commission for the QPS's acts of reprisal.   I wish her luck, but she's more likely to "disappear" like S/Sgt Mike Isles before they'll let her win.

THE CMC has accused the police service of failing to appropriately discipline an officer whose inaction may have contributed to the death of a missing man.

Queensland Civil and Administrative Tribunal documents show that Barry Powell, 64, was still alive and would have been for at least another 24 hours when a local rang police to report sighting an abandoned vehicle at Wyandra in the state's southwest that belonged to Mr Powell on December 6, 2009.

His body was eventually discovered nearby in dense bushland five days later.

An internal police investigation found officer-in-charge of Augathella station, Sergeant Andrew Ernest Thomas, "failed to take appropriate action" after he was told of an abandoned vehicle.

"At about 8.30am on the 11th of December 2009 the body of Barry Frederick Powell was located in bushland approximately 650m northeast from his vehicle," Deputy Commissioner Ross Barnett said in a notice of formal finding dated November 20, 2012, lodged in QCAT.

"It is estimated Mr Powell was alive until the morning of December 8 2009."

Mr Barnett said Sgt Thomas failed to investigate or consider the likelihood that a person who abandoned the vehicle might need assistance and the consequences of them not receiving any, particularly after being "exposed to such environmental conditions".

Sgt Thomas received a two-year suspended sentence, so if any further acts of misconduct were committed, he would be demoted from sergeant to senior constable.

Sgt Thomas did not report the phone call to Charleville CIB until December 10 and a massive search involving SES and police on foot, horseback and motorcycles followed.

"Subsequent inquiries with the family of Mr Powell indicate that he was travelling from Western Australia to his residence in Hervey Bay following surgery," QCAT documents state.

"It is apparent from the evidence contained in the brief that Mr Powell was taking a considerable amount of medication for a number of pre-existing medical conditions."

In the hearing, Sgt Thomas said he "banged" his head on an airconditioner and forgot as other things "simply overtook" his mind.

He also argued the information he received related only "to a vehicle on the side of a road, not to a missing person" and he did not accept that a "sufficient nexus" existed between his failure to take appropriate action and Mr Powell's death.

"It logically follows that had you taken steps to have the report investigated, Mr Powell would have been located some time on 8th of December 2011," Mr Barnett stated in the disciplinary hearing.

However, due to the cause of death being undetermined and a ruling by the entomologist that the mPMI (minimum post-mortem interval) could not be provided because of "gross deficiencies in the collection of original evidence", Mr Barnett said he was unable to find clear "causal connection" between Sgt Thomas' inaction and Mr Powell's death.

The CMC argued to QCAT that the sanction did "not adequately reflect the gravity of the misconduct", which included a failure by Sgt Thomas to "protect the public, uphold ethical standards within units of public administration, and promote and maintain public confidence in the QPS".

Sgt Thomas was transferred from Augathella to Toowoomba in January 2010.  QPS declined to comment while the matter was before QCAT.

The case is one of four appeals of QPS disciplinary decisions by the CMC before QCAT.

They include Constable Anthony Richard Francis, who was demoted after being found guilty of improper access to and disclosure of confidential police information, several conflicts of interest, failing to report misconduct by another officer and urinating on a police vehicle he was using as a "blue light taxi" after a boozy night out.

QCAT is due to make a decision on those matters next month.

The CMC won a landmark legal ruling last year when it was determined in Brisbane's Court of Appeal it had the authority to intervene if it considered police had not been properly punished by internal discipline.

The appeal court upheld the CMC's appeal which found QPS' punishment of an officer whose involvement in a high-speed car chase ended with the death of a bikie manifestly inadequate.

A date for the Sgt Thomas hearing is yet to be set but a compulsory conference is set for March 6.